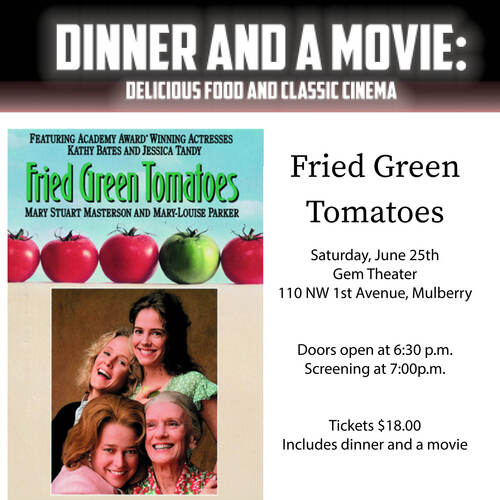 Join us for Dinner and a Movie. In June, we will be showcasing Fried Green Tomatoes. The award-winning 1991 film features the story of Evelyn Couch. "Evelyn Couch is having trouble in her marriage, and no one seems to take her seriously. While visiting relatives at a nursing home, she meets Ninny Threadgoode, an outgoing old woman, who tells her the story of Idgie Threadgoode, a young woman in 1920's Alabama. Through Idgie's inspiring life, Evelyn learns to be more assertive and builds a lasting friendship of her own with Ninny."

Ticket price of $18.00 includes fried green tomatoes, bbq, dessert, and tea, as well as a screening of the film.

The Gem Theater is a restored film and performing arts space in downtown Mulberry.