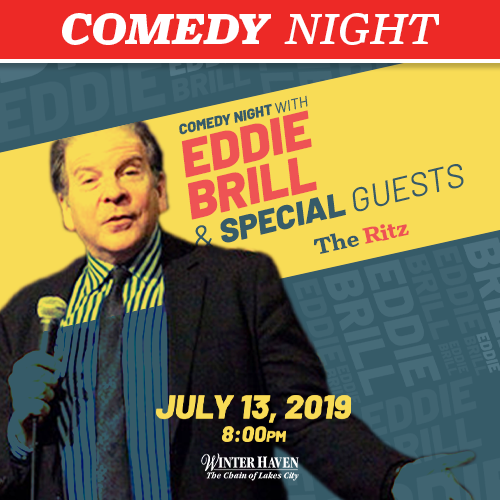 Saturday, May 11 at 7:30 pm At the Historical Ritz Theatre - Downtown Winter Haven

Eddie Brill is a world-renowned comedian, writer and actor. For seventeen years he entertained, engaged and energized audiences as the warm-up talent on the Late Show with David Letterman, pulling double duty as the show’s Stand Up Comedy Talent Coordinator for eleven of those years.

Eddie has taped more than 100 TV shows in six different countries…including ten televised appearances on The Late Show. Brill played himself in the FX hit series, “Louie,” and has roles in a number of films including, “30 Years To Life” with Tracy Morgan.

A 3-time MAC award winner for Outstanding Male Comic in NYC, Eddie created The Great American Comedy Festival which honors Johnny Carson in his hometown of Norfolk, NE, and serves as one of the talent coordinators of the Woodstock Comedy Festival.

Along with Norman Lear in 1978, Brill helped create one of the first ever college comedy writing departments in the country at Emerson College in Boston. He also helped create the Emerson Comedy Workshop, founded in 1976 and continues to thrive today. Brill delivers seminars on comedy, Late Night Television, and becoming a better speaker. He currently teaches a highly acclaimed stand-up comedy workshop worldwide that helps comics young and old take their comedy work to the next level.